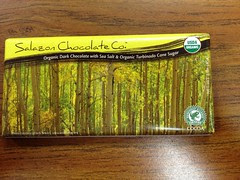 Wow, that title is a mouthful. Just like the last Salazon bar I reviewed, the word organic has been spammed. Regardless of my own positive or negative connotations with organic food, it was the turbinado cane sugar that sold me on this bar.

I love a good hike in a park, but by no means am I the outdoors type. Salazon markets their chocolate bars as energy food for outdoor adventures, but all that matters to me is that the chocolate tastes good. So far, so good, Salazon. 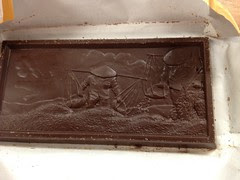 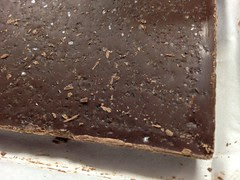 The glossy bar was gorgeous on both sides and had a rich cocoa scent. There was a slight saltiness at first, and this saltiness increased as I chewed but stopped short of overwhelming the bar. The sugar made it sweeter than a typical dark chocolate bar, also giving the chocolate a slight caramel flavor. Of course, the sugar and salt added a light crunchy texture.

I saved the best for last - this is the creamiest dark chocolate I've ever had! I could not get over the smooth texture of the chocolate. It's worth trying just for that. It was just a tad too salty for my liking, but I'm willing to forgive that because of the wonderful texture. My husband and sister-in-law both really liked this bar, too, and neither took issue with the saltiness. 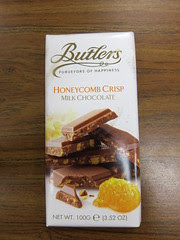 Lately, Butlers chocolate bars have been popping up in my area superstores. Later, I learned that Butlers is an Irish luxury chocolate brand, but I'm never sure what to expect when I find a new brand at Wal-Mart or Meijer (though I've been pleasantly surprised before). This bar made up my mind for me; how could I resist honeycomb?

My husband was raised on honeycomb. I didn't even know it was edible until I met him (and by edible, he meant 'suck the honey out and chew on the wax until you're bored of it'). My prior exposure was limited to the tasty but not very filling cereal of the same name. 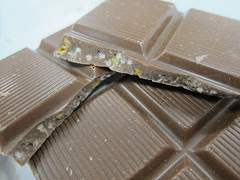 The bar was lumpy on the back (and I love a good textured bar), and the bits of honeycomb and crisp rice revealed themselves when the bar was broken. The milk chocolate itself was firm and only a bit sticky, and it had a nice, mild cocoa flavor (32% cocoa according to the package). Milk chcoolate can put me off at times, but I really enjoyed it here.

The crisp rice and honeycomb bits gave the bar a delightfully flaky texture, as well as a slight caramelized sugar flavor. I didn't really get any honey notes from the bar, but the cocoa and caramel-like flavors melded well without being overly sweet. The crunch was really the stand out feature of this bar, and I was impressed.