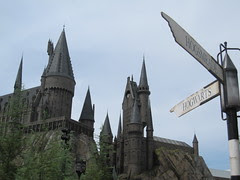 Along with candy and chocolate, Harry Potter is another one of my great loves. Shortly before the fourth book was released in the summer of 2000, I was introduced to the series, and have been a rabid an avid fan ever since. When Harry Potter and the Deathly Hallows was released in 2007, I was feeling bittersweet, but I remember thinking, at least I have the movies to look forward to.

With the recent release of the last movie, I thought it'd be a good time to post a little non-review of the Butterbeer served at The Wizarding World of Harry Potter in Universal Studios Florida. My husband and I went there in June on vacation, and it was like a dream. Even though my husband is not really a Potter enthusiast, he had a blast there as well. 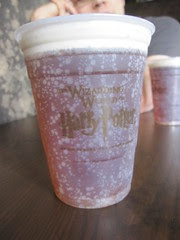 After riding The Forbidden Journey (which was incredible) and the Dragon Challenge, we headed to the Hog's Head Pub to beat the heat. There's only one way to cool off in Hogsmeade, and that's with an ice cold Butterbeer. Only available in the Harry Potter section of the park, Butterbeer comes on ice or frozen, and both varieties are about $3 US.

The regular, on ice variety smelled of cream and mild soda. The bartender first dispensed the amber-colored soda, then topped it with a fascinating bit of magic in the form of a thick white cream. The soda tasted like mild cream soda with hints of butter and vanilla, but the topping was incredible. It was thick and frothy and reminded me of marshmallow fluff, only smoother. It had a lovely vanilla flavor with a hint of saltiness, and seemed to expand and bubble with the carbonated soda, so that there was soda and cream in every single sip. 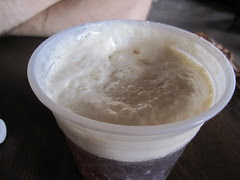 Here's that magical topping in action!
Later that evening, we returned to the Harry Potter area to ride the Forbidden Journey again, and top off the night with a frozen Butterbeer and a Pumpkin Fizz. Again, the bartender first dispensed the Butterbeer, this time a frozen slurry, and then the magical topping. Because the topping comes out of the tap at around room temperature, it melted some of the frozen Butterbeer, dripping down the inside of the cup.

The frozen Butterbeer was much denser and thicker than the regular variety. If it was carbonated, I didn't notice, and the buttery flavor was much richer. While I really enjoyed it, neither my husband nor I could quite finish it, as it was a much more filling beverage. 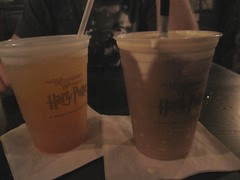 I should also mention the Pumpkin Fizz; when I ordered Pumpkin Juice, the bartender recommended a Pumpkin Fizz instead - half juice and half club soda. Apparently, the Pumpkin Juice on its own is nearly unbearably sweet, and the soda cuts down on the sweetness. The Pumpkin Fizz was still sweet, but it was tasty and refreshing. The pumpkin pie spices were great: cinnamon and nutmeg were easily detected. It was much easier to finish than the frozen Butterbeer!

I expected Butterbeer to be more like a thick butterscotch than a fancy cream soda, but I wasn't disappointed at all. Harry and his friends drink it warm in the books, but that's not practical in the Florida heat. The Harry Potter-themed beverages were highly enjoyable and not terrible overpriced (for a theme park).

The Wizarding World of Harry Potter is an absolute delight for fans of the books and movies, but anyone would have fun there. It's absolutely worth the admission price! If you made it this far, thanks for putting up with my fangirlish raving. Are any of you Harry Potter fans? The last movie was amazing, wasn't it? 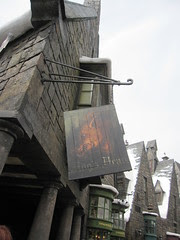 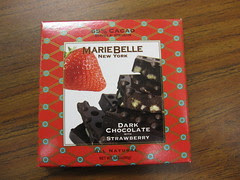 Last time I visited my local fancy grocer, I went nuts buying chocolate. The shelves were loaded with products labeled as "new" or "just in" and I am physically incapable of resisting that sort of marketing!

This Mariebelle bar is one of the new products I bought. The square shape reminds me of Ritter Sport, but I found the packaging to be much more country-cute than the simple and modern Ritter Sport. The bar itself, as you can see in the next pic, reminded me of Legos, and I really loved the look of it! 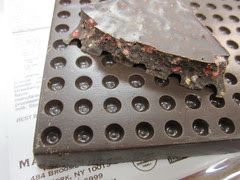 The bar smelled strongly and delightfully of strawberries; it was just loaded with little chunks of fruit! The chocolate was dark and deep but slightly sweet at 65% cacao, giving the bar a bit of a bitter scent.

The freeze-dried strawberry bits gave the bar a nice crunch and a lovely fresh fruit flavor. The tartness and sweetness of the strawberry was well matched with the slightly bitter chocolate. In contrast to the fruity crunch, the chocolate melted smoothly and a bit cool on the tongue.

It's odd, because I liked this bar for the same reason my husband didn't - the dehydrated strawberries. They really make or break the bar, depending on your personal tastes. It reminded me of fruity breakfast cereal - I love that texture! 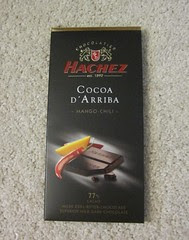 This candy bar combines many things I can't resist: very dark chocolate, mango, and chili peppers. I bought it along with 4 other chocolate bars when I had to restock, and had to break into this one first.

From the gold details on the package to the crisp silver foil, everything about this bar's design was elegant. Inside the wrapper, the bar was a gorgeous, glossy brown - a total feast for the eyes. 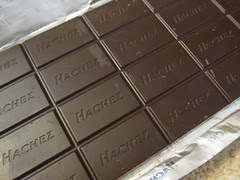 The lovely bar had a very crisp snap, but the 77% cocoa was a bit dry and chalky. The fruity flavor of the mango enhanced the fruity notes of the dark chocolate, but I think it would have benefited from a slightly lower cocoa percentage.

The chili was very mild, so those with lower spicy tolerance may not need to avoid this bar. The combination of slight heat and mango with the bitter chocolate reminded me a bit of curry powder, which was a unique touch. The finish had a nice, tart mango flavor, but the texture of the bar was just too dry for the mango - and I normally love dark chocolate. 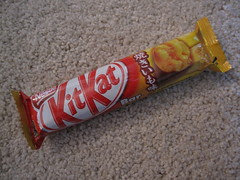 I've been hanging onto this Grilled Sweet Potato KitKat for a while, as it was the last thing in my candy stash, and the only KitKat I've had recently. I've restocked my stash, but I haven't bought any new KitKats as it's been too hot to have them shipped to my house.

Summer is in full swing where I live. Even in my air-conditioned house, my cats stretch out as far as they possibly can on the kitchen floor for maximum cooling. Forgive me a little cat tangent, but my cats have a really funny way of stretching out. They both do it.

The Yakiimo KitKat smelled like potato, but it tasted a bit like lemon. The white chocolate coating on the large bar was very thick, and had an extremely mild flavor. I didn't taste the potato much, just a hint at right away (mostly attributed to the scent).

I liked the lemony, sweet flavor, and the buttery texture of the chocolate was nice. It didn't seem too sweet, but there wasn't much going on in terms of flavor at all. It reminded me very much of the Daigakuimo KitKat, but since both were sweet potato-based, that's not surprising. It was good, but bland. 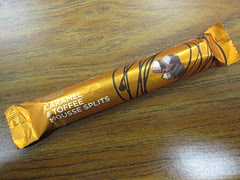 It's coming up on the third anniversary of this blog! I haven't been candy blogging nearly as long as many people, but after three years, it's nice to come across a candy bar that's completely unlike anything I've tried since I started this blog.

Marks & Spencer is a department store chain in the United Kingdom. According to their website, they have locations in 40 countries, but the United States is not one of them. This candy bar is another kind gift from my boss, who is from the UK and sometimes brings candy back to the States with her when she visits. My boss told me that she thinks this bar is re-branded Thorntons chocolate, and this review at Chocoblog seems to back that up, but I couldn't find anything official. 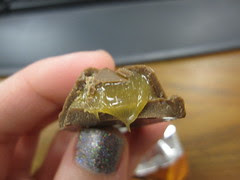 The amazing thing about this bar is that each of the segments has both toffee and caramel filling, separate but not divided so that they mix together a bit in the middle. The toffee was very buttery and just a bit salty, and while those flavors were tasty, it was very, very sweet. The texture of the toffee was like lightly whipped mousse, soft, creamy, and thick.

The caramel on the other hand was runny and smooth, and somehow even sweeter than the toffee mousse. The milk chocolate melted smoothly with a hint of stickiness, but it was still quite good. It had that milky richness that many British bars have. On the whole, this bar was a bit too sweet for me, but it was certainly unique. I preferred the buttery, salty flavor of the toffee mousse to the flatter caramel.

Marks & Spencer Website
Posted by ebidebby at 7:32 AM 1 comments 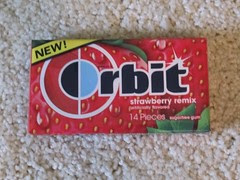 Happy Independence Day to my American readers, and belated happy Canada Day to my Canadian readers! I was curious about the national holidays of other countries, and came across this list. It looks early July is a fairly common time for Independence celebrations around the world, so best wishes to all who are celebrating.

Something that always catches my eye at the grocery store is a new flavor of Orbit gum. Recently, I've seen commercials for Tropical Remix and Strawberry Remix, and since I'm such a fan of Strawberry Mint, I had to go with Strawberry Remix.

The gum had a strong fruity scent, and it was strawberry-like, but with a little citrus scent. The flavor was tart, slightly sour, and had a fruity berry flavor. It wasn't terribly authentic or just strawberry, but I suppose that's the remix. Still, the gum was juicy and pretty good.

The flavor was solidly fruit - no mint and no cooling sensation. The chew started out very bouncy, but it did harden as I chewed. Most of the flavor was gone in 2 or 3 minutes, and even though the leftover flavor wasn't bad, I wished the gum wasn't so short-lived.