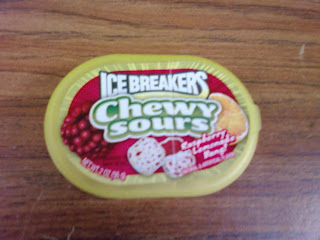 Bang! I love the Ice Breakers Sours series of candies, so when I saw these Chewy Sours at the store, it seemed like a good idea to try them. I thought they would be like Chewy Spree, but I was wrong.

The first issue was that they all stuck together in the package, so maybe they were stored at hot temperatures somewhere. They were also oddly shaped and not at all uniform. Even though they weren't what I expected, I was still pretty excited about them. 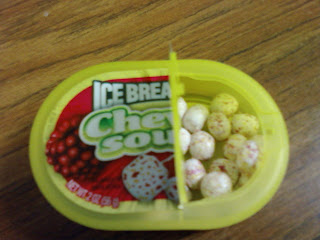 The candies smelled a bit like a cleaning product, mostly like citric acid. The coating, which looked like the regular sours, was good and sour and definitely lemonade flavored, but it all went downhill from there. These were chewy in the same way that licorice is chewy, which isn't a bad thing, but doesn't really make for a good, lasting chew.

The real issue I had with these was that the flavor of the licorice-type chew was that it was fairly flavorless. Once the sour burst (bang?) was gone, I was left with a sweet, oily, vaguely fruity wad of something that I didn't really want to be eating. It was very disappionting, and I'll stick with the regular sours. The idea of a chewy sour is good, but the execution in this case was poor.