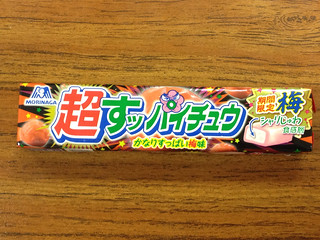 As a kid, I could never get enough sour candy. I could eat it until the insides of my cheeks were raw! These days, I still love a sour sweet, but my self control is a bit better. As far as sour foods go, it doesn't get much more extreme than umeboshi. Umeboshi is one of those polarizing foods that people either seem to love or hate (like black licorice or natto). It's an extremely sour and salty pickled plum (though the fruit is apparently closer to an apricot) that's often served with rice. I like them, but I don't think I could just eat one by itself. This Hi-chu flavor actually just calls itself ume and not umeboshi, but sour plum is a natural fit for Japanese candy.

It's interesting to see Hi-chew coming out with lots of new flavors and textures, perhaps to compete with Puccho. This particular flavor has crunchy sugar crystals in the center. Actually, this isn't just regular Hi-chew, it's Suppai-chew, which is a cute play on words because suppai means sour in Japanese. Furthermore, these aren't just sour, they're 超/SUPER sour! Just look at the puckered face on the logo around the パ! With that lead in, I was expecting at least a Warheads level punch in the mouth. 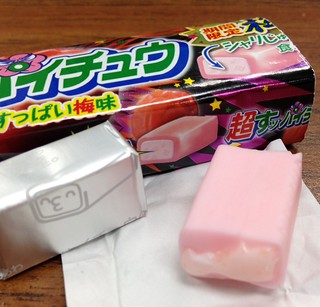 Sadly, it was not so. The Hi-chu smelled and tasted like ume candy, which is to say it sort of tasted like sour cherry. It was sour, but I wouldn't say super sour. There was definitely a citric acid-like flavor, along with the fruity flavor of the plum. While I really did like the taste and found myself eating a lot of them in one sitting, the mild to moderate sourness was a bit of a letdown when I was expecting a kick.

The closest western analog to the texture of Hi-chew might be salt water taffy or Starburst, but Hi-chew are actually a bit chewier and don't tend to break down as easily. This flavor softened easier than normal Hi-chew because of the large sugar crystals in the center. The sugar crystals were extremely sweet and crunchy and actually made it a bit painful to chew. I don't think it would have bothered me as a kid, but it was a bit unpleasant on my adult teeth.