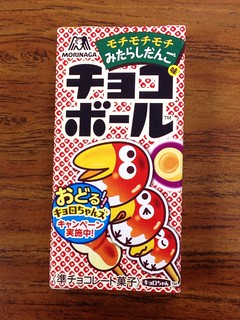 There are some Japanese sweets that are just hard to come by in other countries (unless there is a large Japanese population in the immediate area), and dango is one of them. Prepackaged dango from a store is okay, but you just can't beat the fresh stuff that you can buy at traditional sweet shops or festivals in Japan. Even making dango yourself can be a tricky venture, because you need to track down specific Japanese rice flours to get the texture just right.

Mitarashi dango are rice dumplings covered with a sweetened soy sauce glaze. The end result is a lovely mixture of sweet caramelized sugar and savory soy sauce. The closest analog to the sauce might be maple syrup, although the mitarashi sauce tends to be less sweet and more savory. Rather than being a spin on the usual Choco Ball, this variety is more of a nod to actual mitarashi dango: there is a chewy mochi-like center wrapped in flavored white chocolate. I purchased these from napaJapan right before it started to get too hot to ship chocolate. 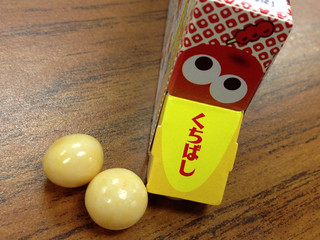 The balls come out of Kyoro-chan's beak! Too cute.

After pulling open Kyoro-chan's beak, I was hit by a scent that reminded me of maple syrup. The white chocolate shell tasted just like it smelled, like a slightly more savory maple. It melted slowly, so when I chewed the candy, the coating stayed a bit crisp. It did taste like a very mild, sweet version of mitarashi sauce.

The chewy "mochi" center had a texture more like that of gummy candy than actual mochi. It was firm and bouncy and had almost no flavor (just a slight sweetness). Overall, the Mitarashi Dango Choco Balls were fun to eat and brought back nice memories of eating mitarashi dango. More than anything, though, these made me want the real thing.

This Mitarashi is something I need to taste! I almost tasted other flavorus and they are incredible.

And I'm with you... it's hard to find good and rare japanese sweets (or food) if you aren't on japan or a "high point of Japanese mass".

Mitarashi sauce is pretty easy to make! It's the mochi that's the hard part. I wonder what else would taste good with mitarashi sauce?