The items in this review were provided by a marketing representative. 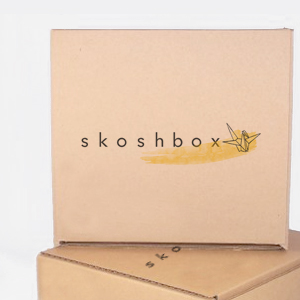 The most common question I get about this blog is, "Where do you buy Japanese snacks?" In the United States, unless you live in very specific areas, Japanese import shops are few and far between. When I was contacted by a marketing representative for Skoshbox, a new subscription box just for Japanese snacks and goodies, I agreed that it was a perfect fit for Snack Love readers.

Skoshbox was created by two childhood friends who have lived in both Japan and the United States. The creators hand-pick each item, ranging from Japanese candies to traditional snacks to stationery. Skoshbox kindly offered to send me their June box, and I'll be reviewing the snacks over the coming days. The service is $12 a month (including shipping), and a 6 month gift subscription option is available. If you think you might be interested, check out Skoshbox.com for ordering information. In addition, Skoshbox has kindly created a promotional code for Snack Love readers! Use the code SNACKLUV04 at check out to receive a free mystery snack with your first box. This code expires on July 15th, which is also the last day to sign up for the first box. At this time, Skoshbox only ships within the United States. This is a pretty classic assortment of Japanese snacks and candies, which would be especially great for someone new to the world of Japanese goodies, or someone feeling nostalgic for old favorites. The snacks covered the spectrum from savory (Kaki no Tane and Senbei) to sweet, chewy to crunchy to hard candy, and the eraser was a nice touch! A postcard listing everything in the box was included, and I loved that there was a little fun fact about each item. To start with something savory, I tried the Kaki no Tane. It's a mix of peanuts and tiny rice crackers shaped like persimmon (kaki) seeds. I never paid much attention to Kaki no Tane, although I did think that they were actual persimmon seeds (so now I feel a little silly). But clearly, I was wrong to ignore this snack. The rice crackers were mildly spicy with a light soy sauce flavor, and they had a nice crispy texture. The peanuts were simply lightly salted nuts. The mix of the two components was great, and they were so addictive! Choco Ball is a simple snack: chocolate covered nuts. Although the card enclosed in the box said that these had an almond in the center, it was actually a peanut. The peanut was toasted, crunchy, and much lighter than the peanuts I'm used to, but I liked the texture! The bite-sized balls were just slightly sweet and highly addictive. Unfortunately, shipping chocolate in the summer months is always a bit of a gamble, and though the Choco Balls were still tasty, they were a little worse for the wear. As for the Air-In eraser, I thought it was a fun extra. Japanese stationery has a well-deserved cult following in the USA. One swipe of this soft, gummy eraser and you'll see why. I can't even count all the Japanese pens, pencils, and erasers I've amassed over the years, and I'm still hungry for more.

While I was a little disappointed that the Choco Ball had melted, I was still quite pleased with the variety of items in the box - many of which were much more heat-stable! Stay tuned for more items from the Skoshbox!