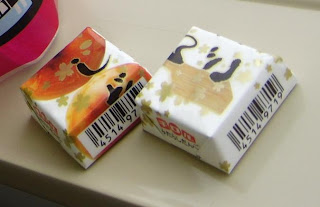 Sorry for the recent lack of updates, but I've been on vacation in Japan. So, as a result, I have a lot of candy to review! I was able to find a ton of Tirol chocolate, so I'll start with the Mitarashi Dango deluxe Tirol. It cost about 20 yen at a convenience store.

Mitarashi Dango are made with syrup from soy sauce, sugar, and starch. I ate some at the Mitarashi Festival in Kyoto during this trip, and they were quite tasty, especially washed down with blessed spring water from Shimogamo Shrine. The treat smelled like rich, slightly toasted white chocolate, and inside, there was some of the mitarashi syrup over a mochi gummy center. The mochi itself doesn't have much of a taste, but the syrup was tasty, with a slightly bitter flavor.

It definitely wasn't as good as the real thing, and the sweetness of the white chocolate was a little much. It wasn't too sweet, but having tried it after trying the real thing, I thought the syrup went better with mochi than with chocolate.

OMG there is a mitarashi dango tirol?? My fave dango ever...

Hope this is still around in november when I go!! :)

Compared to the real thing, these were a little disappointing, but pretty cool as a standalone chocolate!